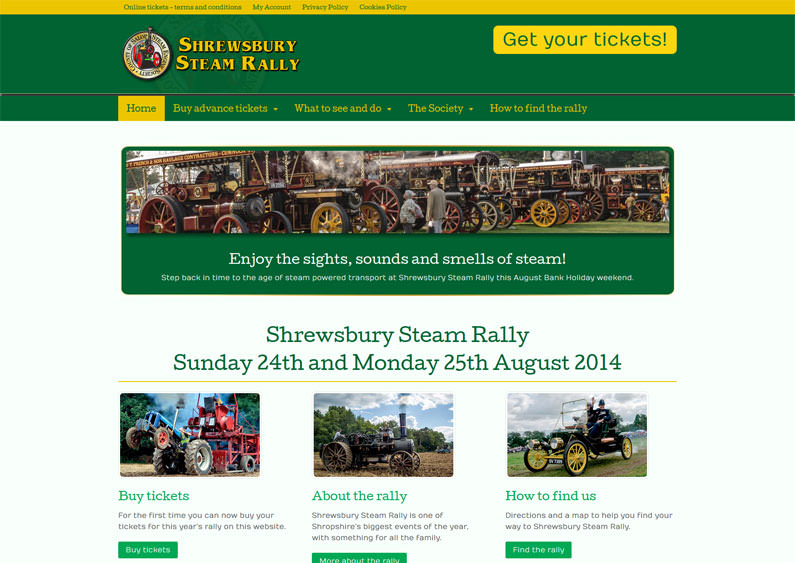 Shrewsbury Steam Rally is one of the longest established and highest attended annual events in Shropshire and is run by the County of Salop Steam Engine Society. It is held every August Bank Holiday weekend and has done since the late 1960s. It attracts 20,000+ visitors every year.

The society already had a WordPress website that had been built and maintained by volunteer club members.

They knew that it was time to bring in professional help on the website as they knew it wasn’t bringing in enough visitors to the event but weren’t sure what they could do to help that. It was also struggling on a limited hosting platform.

They also wanted to try online ticket sales but needed guidance on how to make it work, and even whether it was worth investing in the long term. So they turned to Moghill for help.

How we helped them

The first step was to bring the existing site into our hosting, keeping hte original site live while we developed a new website with responsive design and a new, modern look.

Initially we discussed what they wanted to achieve and what they currently had in place (with regards to ticketing) so we could develop a system that would work well but also fit in with what they already had in place.

This was important because our solution would have to integrate with the gate system in use, running smoothly and preventing ticket duplication – and fraud.

It was also important that we work with them to develop a cost-effective solution as budget was limited.

It had originally been very society-focussed rather than event-focussed so we put ticket sales front and centre along with useful information visitors would want to know, such as camping arrangements and facilities as well as what was happening at the event itself.

Despite only very light promotion – only one post on the event’s Facebook page – ticket sales took off, making a seven-fold return on investment on the site in just one month of sales.

Even though nobody in the society had expected such sales, the website, built with WordPress and the WooCommerce platform for online sales, never missed a beat and coped effortlessly with high demand.

With the proof of concept that the online ticketing worked, and would be used, they have since implemented a full permanent ticketing system along with the hardware investment in terms of scanners on the gate for admissions.

But the site and its overnight success allowed the society to make an informed investment decision that changed the whole ticketing system, making it easier and better for visitors to get hold of tickets and spend less time queuing – and more time having fun!