Videos can be a powerful tool in business websites, but all too often it’s used badly and without thought. Here are some things to consider before you use video on your website.

The following is an overview of how to avoid legal issues on social media.

With the current case of Lord McAlpine suing people who falsely named him as a child abuser, Twitter and social media in general is under the microscope like never before.

The former Tory treasurer is chasing everyone who named him on Twitter based on rumours he abused children in a home in Wrexham in the 70s. And, for the avoidance of doubt (and in case his lawyers read this!) we should point out those rumours are totally untrue.

Your Tweets could be legal dynamite, but not literally.[/caption]

Lord McAlpine has deep pockets and a lot of people who repeated the allegation will be getting a letter from his lawyers.

If you use social media, this is the perfect example of why you need at least a basic understanding of the law of defamation and libel before you bash out a Tweet and press the send button.

And it’s not just libel. Earlier this month nine people who used their Twitter accounts to name a woman raped by footballer Ched Evans were ordered to pay her compensation.

All said they didn’t know identifying a rape victim was a criminal offence.

In all cases it’s no defence to say you did not know the law. A Tweet in particular can be retweeted to thousands upon thousands of people, gaining a massive audience beyond your followers.

And it doesn’t matter how many times other people have tweeted or blogged the statement (whatever it is) before you. If you repeat it, you are just as guilty as the person who started it.

That’s why Twitter users in particular are under the microscope, but the law also applies to blogs and – to a lesser extent – Facebook posts, where a lot depends on privacy settings.

Deleting won’t save you

Deleting Tweets and posts won’t help as they can be recovered, and social media sites will hand over your details if asked for them by the police or by a court order.

But in the last few days I’ve seen a lot of blogs repeating the most outrageous allegations of child abuse against politicians of all parties and I expect the bloggers involved will be getting letters from lawyers sooner or later.

Some high profile Tweeters have been caught out by this, not to mention the BBC and ITV, so the risks are clear.

Back in the old days…

In the days before widespread use of the internet and social media, when only newspapers, magazines and TV and radio could broadcast to wide audiences, this wasn’t a problem.

Journalists understood the law, and what they wrote or put on air went through the filter of an editor who (mostly) would pick up anything libellous or likely to break the law.

The onus was – and still is – on them to get it right. And as a Twitter user or the writer of a blog or poster on Facebook the same laws apply to you.

That means it’s your responsibility that your tweets don’t break the law or defame someone. And if they do, you will face the consequences.

So what’s the law now?

You can fall foul of the law in two different ways:

By committing defamation, or libel in particular. Libel is when a person’s reputation is damaged by an untrue statement that is written and published.

Libel is not a criminal offence, it is a tort or a ‘civil wrong’ that means the person who you libelled can sue you in a civil court and claim money as compensation for the damage to their reputation.

There’s no legal aid for libel and it’s very expensive to start an action or defend one. But if you libel someone who has a lot of money you are in trouble.

There are lots of defences for libel, the chief one being that the statement made was true. But again you have to prove that and that can be very expensive indeed.

You don’t even have to name the person directly.

However you can’t libel someone who is dead, which is why anyone can say what they like about Jimmy Savile.

This is a simplified version of a very complex law. For more information see these pages:

Sense about Science: A quick guide to libel laws in England and Wales (PDF file)

The main law we are dealing with here is the naming of rape victims. There is an automatic lifetime ban on identifying the victim of any sexual offence. You can’t go to jail for this, but you can be fined as in the Ched Evans case.

The same goes for identifying juveniles – those under 17 years old – also a danger area, whether they are offenders or victims.

In most cases this is banned outright though in extreme cases, such as the two boys convicted of the killing of Jamie Bulger, the judge allowed them to be publically named. However people who recently tweeted pictures purporting to be one of them have been charged with contempt because they can no longer be identified. Confusing, huh?

Commenting on criminal court cases – especially ongoing ones – can be risky and is best avoided as the law of Contempt of Court is very restrictive.

BBC News: Twitter users: A guide to the law

The Daily Mail goes into more detail, especially what the offending Tweets said.

Then there’s the whole issue of offensive Tweets and Facebook posts, that have led to some recent high profile court cases and jailings. Though there is a debate over whether this is freedom of expression it’s clear the courts are taking it seriously.

Here are some examples:

And another McAlpine story: The Guardian: McAlpine’s solicitor warns long list of Twitter users to ‘apologise or be sued’

Admittedly, these are extreme examples but when it’s so easy to type something out and send it, it pays to think before you Tweet or post:

These are just a few of the main considerations. There’s a more comprehensive guide here on the Lawyers4Mumpreneurs website:

Louise Hudson set up in business as an independent chartered accountant and business advisor in 2012 and needed a website that reflected her friendly and approachable ethos.

She wanted a website that was simple and uncluttered as well as modern, and we suggested that she adopt the new responsive technology that would allow her site to be viewed as easily on a desktop computer as it can be on a mobile phone or iPad. 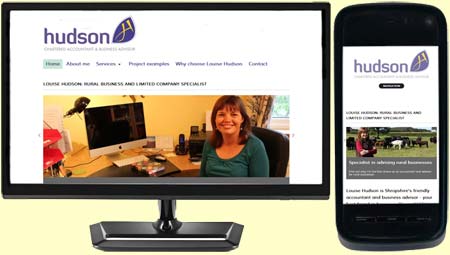 We took the time to understand Louise and her business aims so that we could produce a website that got the basics across without being stuffy in the way some accountancy websites can be.

We used images and a logo supplied by Louise and created a simple site that is user-friendly and modern with text that is short and to the point yet friendly in tone.

We also integrated the site with Louise’s professional social media profiles on Twitter and LinkedIn.

Louise Hudson said: “It was a pleasure dealing with Moghill in the construction of my website.

“The website was designed in the way I requested – Fiona and Patrick took time to understand and listen to my requirements and provided a personal, user-friendly and cost-effective site.

“My queries are dealt with promptly. I am also very pleased with the responsive design which allows my website to be viewed easily on a smart phone.”